The most common type of Shoulder Patch you’ll find are the ones Councils today are producing. These CSPs (Council Shoulder Patches) were first introduced as official uniform insignia in the 1970s, prior to that Councils or Communities issued their name on Community Strips which can be found in many color combinations based on era, and which part of scouting it was from (Boy Scouts, Sea Scouts, etc.)

Council Shoulder Patches (CSPs) – Council Shoulder Patches are emboidered patches that were officially introduced in 1972 as official insignia. They are beautiful and the subject of many collector’s affections. Most CSPs are not especially valuable because they aren’t very old and many were produced, and any scout could buy as many as they wanted in most cases. There are some Councils that were very strict about how many CSPs a scout could purchase so there are some rarities, as well as some special issue patches for anniversaries of the BSA or the Council itself. For questions about your CSP please Contact Us for assistance.

Jamboree Shoulder Patches (JSPs) – Jamboree Shoulder Patches are special shoulder patches that a Council produces for its members attending a National Jamboree, or in some cases a World Jamboree. These are often unique or low-production designs so they are rarer and more valuable, although many are still not very expensive because extras are often purchased as souvenirs or for trading at the Jamboree. There are also patches known as JCPs, or Jamboree Contingent Patches, that are special designs for the Jamboree, but are not designed to be worn as shoulder patches or on the Scout Uniform. 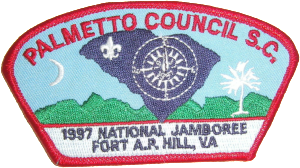 Community Strips can be found in many color combinations depending on the date and scouting organization:

All Scouting Groups:
1955 – 1972: Red Strip with White Lettering, referred to as a RWS (Red White Strip), after 1972 the CSPs we know now became the official insignia.

Note: During the time where community strips were used, they could be found a curved strip with just the community, a community and a smaller state strip together, or the full sized combination patch above.