Order of the Arrow Identification and Value Guide

Order of the Arrow (OA for short), is an honor group within the Boy Scouts, where a Scout must be elected by his peers for leadership and integrity. The Order of the Arrow was founded in 1915 at Treasure Island, a summer camp run by the Philadelphia Council. E. Urner Goodman and Carroll A. Edson founded the group to recognize honor campers. The OA officially became part of the Boy Scout program in the 1940s, prior to that individual lodges often ran programs without a single standard set of guidelines.

OA Items are typically issues by a Lodge which is the equivalent to a Council for Boy Scouts, each Lodge has its own number and totem which are typically featured on the flap, as well as the lodge name which is usually a word or words with meaning from a local Indian Tribe. Listed below are the most common Order of the Arrow collectors items. Keep in mind that there are hundreds of different types of items and over the years, that Lodges have issued all kinds of items so BE PREPARED to see some interesting stuff when you’re out there collecting!

Order of the Arrow Lodge Flaps

This is by far the most common type of Order of the Arrow item that is collected. Flaps are worn on the right pocket flap of the uniform and show which OA lodge a Scout is a member of. Each Order of the Arrow lodge is affiliated with a Council, and each Chapter of a Lodge, represents one District of that Council. There are a just under 300 Councils and Lodges within the BSA, and each Lodge produces their own unique standard issue Flap for their members. The standard Flap for many Lodges also has a small detail change based on the Brother’s status as Ordeal, Brotherhood, or Vigil. Usually that change is a different colored border.

The appeal of collecting Lodge flaps is obvious, they are bright, colorful, varied, and it helps folks from different Lodges meet and interact with each other. In addition to their standard issue flaps, many lodges have special limited issue flaps for other events such as NOAC, Section Conclaves, Anniversaries, Jamborees, etc. There are also a few terms that you might see thrown around like a Shadow or Ghost Flap, a Bullion Flap or Patch Sets, shown below are some examples of these types, click the thumbnail to see a full size image.

Probably 99% or greater of the Lodge flaps you’ll come across will be worth less than $10 because they have been produced in mass numbers and any given Lodge’s members will usually buy extra flaps specifically for trading and collecting. Many collectors focus on collecting different versions of their own Lodge’s flaps, or maybe the flaps of those in their Region or Section. More advanced collectors may start trying to collect Flaps from all active Lodges, more advanced still you can try to collect Flaps from every Lodge that has existed, and even beyond that you can try collecting “First Flaps”, which are the flap that a Lodge used when it was first created, some First Flaps are extraordinarily rare with only a handful known to exist. These are the types of rarities that you might see on ebay occasionally selling for hundreds of dollars. Other common causes for rare and valuable Flaps are from Lodges that only existed for a short time and then merged or didn’t renew their charter, and some Lodges have very restrictive policies on how many flaps you can buy, which can also make the Flaps very rare.

Order of the Arrow Sashes

No known examples exist of some of the earliest known designs of sashes, but generally early sashes will be of white wool felt with a red arrow sewn onto it. Vigil sashes from this period are especially popular with collectors. Late sashes would use twill instead of wool felt and this is the easiest way to determine relative age. Additional things to look for include whether the arrow is sewn on, ironed on, flocked, or embroidered.

The field of sash collecting can be daunting at first because these items seem so simple, but there is a wealth of knowledge and many details to look out for. The main issue that complicates sash collecting are the number of special issue or limited edition sashes such as the 75th anniversary black and white arrow sash. At any rate, you can identify older sashes as those where the arrow is solid and all the lines are straight, as well as on a felt sash. These will be collectible, while most newer sashes are fairly common.

The OA Distinguished Service award consists of a silver arrowhead pendant with an arrow going behind it. The oldest OADSAs have a pendant that hangs from a green neck ribbon. Newer awards are on a white neck ribbon with red arrows on each side. Since 1980 the pendant has been rhodium instead of silver. 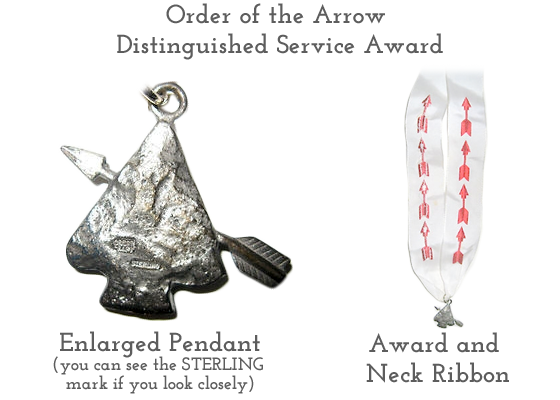 NOAC is a national meeting for Order of the Arrow Lodges and Members. There are all sorts of activities, competitions, classes, and other things to do. NOAC is held every two years and the first was held in 1940. Items from early NOACs through the 50s are going to be the most likely to be valuable. The most collected NOAC item will be special issue Lodge Flaps for member that attended NOAC. There are also Participant and Staff patches issued which are collectible and valuable.

If you have a Order of the Arrow items and need help with identification or values, please Contact Us for more information.