The Boy Scouts is a large organization and there are hundreds of items that have been produced bearing some affiliation from pocket knives to neckerchiefs to jewelry. These items could be issued by the National BSA, a Regional Office, a Council, District or even for an individual Troop, Pack, Patrol, Den, Etc. Almost all of the items that are affiliated with the Boy Scouts are Collectible, but most will only be worth $5-10, even if they’re from the 50′s, 60′s, or 70′s. There are some items that can sell for $1,000 and up but they are exceedingly rare and for every item like this there are hundreds of thousands of other cheap items you might run into.

For now, we’ve included starter guides for Boy Scout Handbooks and Uniforms but they are very simple at this point and only address the most valuable items. We plan on expanding these sections and adding more in the future.

Click these links to skip to a particular section:

The Boy Scouts of America has published an Official Handbook since 1910. The Handbook is an important document that helps a Scout learn the skills he needs to advance in Scouting and Life. Early handbooks in great condition can be worth enormous amounts to collectors, but they are obviously very rare. In general, only printings of the first few types of Handbooks up to the 1920’s will be valuable. Later printing are all quite common and available to dedicated collectors. Below is a description of the most valuable Boy Scout Handbooks. 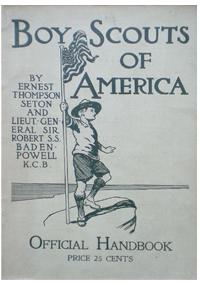 Identification: This is the first handbook published by the BSA, early printings have both Ernest Thompson Seton and Baden-Powell listed on the cover, while later ones will have just Thompson. The cover design features a scout on a rock holding up an American Flag. The earlier British version title Scouting for Boys by Baden-Powell has a Scout holding a British flag.
Varieties: Collectors have identified nine different varieties of this cover type, being as old as it is, it is very rare and valuable, especially in good condition. It can be found in a tan/yellow or green/light green printing varieties as well as a special edition that has a red leather cover with gilt imprint. 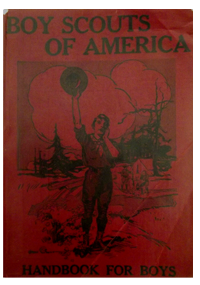 Identification: This is the second cover type and is titled Boy Scouts of America Handbook for Boys. It’s cover features a scout on a hike raising his hat in the air with his hand to his mount yelling.
Varieties: This version of the Handbook can be found with a red/maroon cover or a olive-drab cover. There were many printings and more than 10 different varieties identified by collectors. 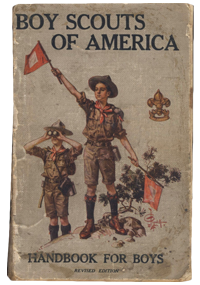 Identification: This is the third cover type and is titled Boy Scouts of America Handbook for Boys. It’s cover features two scouts with one signaling with flags and the other using binoculars to read the reply. This cover style was printed from 1914-1927 so checking the title page for the exact edition and printing is very important on this design. Identifying an early edition is worth more than one of the later ones.
Varieties: There are numerous varieties of this version of the book. Some of the main differences are the type of flags being used (square center vs. have diagonal lines), direction the scouts face (left or right), whether the Scout emblem has a knot hanging below it or not and more. The differing combinations of these make for a huge number of varieties.

The Boy Scout Uniform has long been modeled on military style designs. Over the years the BSA has gone through a huge number of uniform designs and at any given time Scouts often have multiple choices such as long pants or shorts, long sleeves or short, type of hat, socks, neckerchief and many more even. As with other types of collectibles, uniforms from the teens and twenties will be the most valuable, moreso depending on the insignia items on them. Early uniforms will typically have rank and merit badges sewn onto the sleeves and you should never take them off if they’re already sewn on! An easy check for early coats is to look on the back of the buttons and see who the maker is. “Eisner” buttons will be found on authentic coats and are a good clue that it might be a valuable uniform. 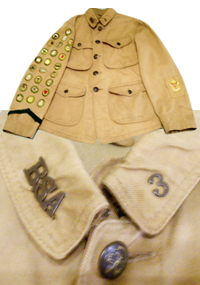 Identification: This jacket was the first uniform worn by Boy Scouts, although in the early days many scouts didn’t necessarily have enough money to afford a uniform so some exceptions and makeshift solutions are common to find. This coat has a high, choke collar that buttons at the throat, it would have been worn with collar brass for “BSA” on one lapel and the Troop number on the other. These coats have 4 pockets, two breast pockets, and two at the waist. The coat would have been worn with a belt around the waist, breeches, leggings, and a campaign style hat. 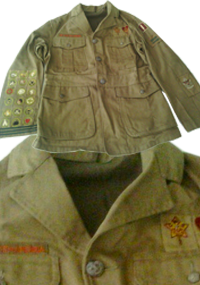 Identification: This is the second type of Eisner Coat with four pockets again, but with an open collar. These jackets will still usually have the merit badges sewn onto the sleeve and will have Eisner buttons on them as well.