The Award consists of a ship’s wheel with a compass inscribed and a an anchor with the First Class emblem on it. The medal hangs from a blue ribbon, the modern award has a silver bar on the top of the award, while older versions do not. Originally the pendant was made in Sterling Silver, but current medals are made with lesser metals. There are also a cloth patch insignia and a square knot insignia for the Quartermaster Award.

The symbology of the Quartermaster Award symbolism is described by the Boy Scouts as:

The blue stands for the loyalty to country; the compass suggests the importance of a carefully chosen direction in life; the wheel reminds Sea Scouts that they are the guides of their own future; the anchor reminds the Sea Scout that a truly worthy life must be anchored in duty to God. 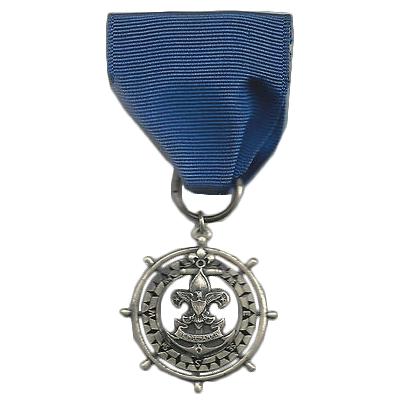 If you have a Sea Scout Quartermaster award, please Contact Us for more information.