In 1949, the Explorer Scout program became simply Explorers and a new advancement program was instituted with four ranks: Apprentice, Bronze, Gold, and Silver. The Silver Award became the new highest level of achievement and remained so until 1958. There are two different designs of the Silver Award that correspond to the period of 1949-1954 (Type 1) and 1954-1958 (Type 2). The reason for the change is because in 1954 the Air Scouts joined the same advancement system.

Shown below are the Silver Award items for both Type 1 and Type 2, with some extra information about each type. 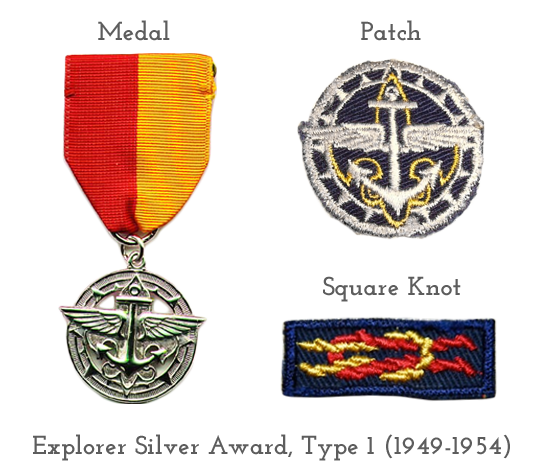 From 1949-1954 approximately 3,000 Type 1 Silver Awards were earned, which makes the Type 1 a very rare and desirable item to collectors. The patch and knot are also desirable to collectors, but the medal is by far more valuable. Even rarer than the Silver medal are actually the a Bronze and Gold Award in the same design but with a different metal pendant. These were given for maybe 1 or 2 years at the beginning of the 50s and then discontinued, many people don’t even know they exist. There are also patches for the Bronze and Gold Award where instead of Silver Embroidery it is Bronze or Gold, respectively. The Square Knot only exists for the Silver level of course.

The Type 1 Medal consists of the CAW emblem (Compass, Anchor, & Wings) hanging from a red and orange ribbon. The same CAW emblem can be found on Contest Medals that were awarded at events, but they have a red and blue ribbon instead. While the contest medals are collectible, they are not as valuable as a Silver Award. 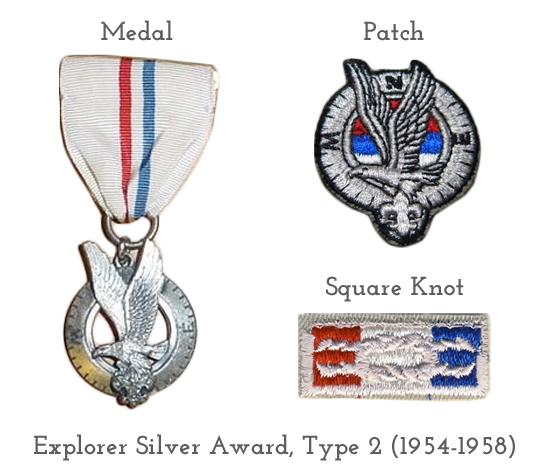 From 1954-1958 approximately 10,000 Type 2 Silver Awards were earned, while the Type 2 is still a hard to find item, it is much easier to find than the Type 1. The Type 2 patch and knot are not particularly valuable, but they are included here for the sake of completeness. The Type 2 Medal uses the same pendant as the Air Ace Award, instead of the CAW emblem from the Type 1. The pendant on the Type 2 has an Eagle in flight superimposed over a compass hanging from a white ribbon with red and blue stripes.

If you have an Explorer Silver Award, Patch, or Knot, please Contact Us for more information.