There are three awards recently or currently designated by the Boy Scouts of America for Scouts who demonstrate Heroism in the attempt to save another’s life. The awards are given by the National Honor Council who review nominations that are submitted. These awards are only given to Scouts, but they need not be for saving another Scout’s life. In order to earn the award someone must nominate the Scout and a witness must attach a statement to verify the events occured.  The awards are listed below: 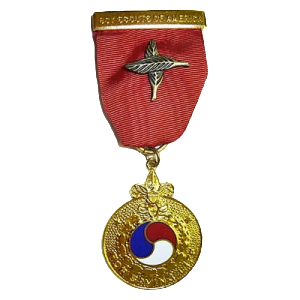 This Medal is awarded to a youth or adult Scout “who has demonstrated unusual heroism and extraordinary skill or resourcefulness in saving or attempting to save a life with risk to self”. The Honor medal can be awarded with crossed palms for those who took “extreme risk to self”, if the Honor medal is awarded without palms it is for “considerable risk to self”. The BSA website listed 277 Honor Medals with Crossed Palms and 2354 Honor Medals without palms presented since 1924, these awards are very rare and older types of the awards from the earlier years of Scouting are more valuable. Until 1960 the Honor Medal was real gold, while since 1960 it just gilt silver. It has the unique three color enameled center that makes it an easy award to notice and recognize. 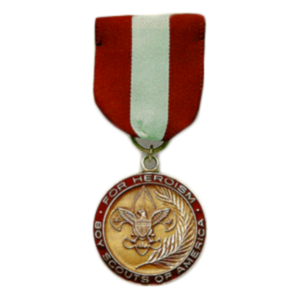 This Award is given to a youth or adult Scout “who has demonstrated heroism and skill in saving or attempting to save a life at minimum risk to self. The action taken need not involve attempts of rescue or risk to self, but must put into practice Scouting skills and/or ideals.” The BSA website lists 6,077 Heroism Awards presented since 1923. The Heroism Award was discontinued as of Dec 31, 2012, but it can be identified by its red, white, red ribbon with a gilt silver medallion. Older versions of the medallion read “For Meritorious Action”, while newer ones had “For Heroism”. 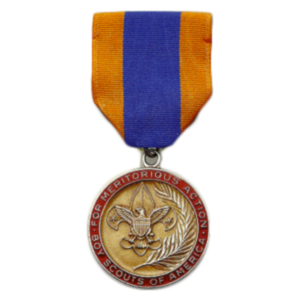 This Medal is given to a youth or adult Scout “who has performed some outstanding act of service of a rare or exceptional character that reflects an uncommon degree of concern for the well-being of others.”. The Scout need not have saved a life or risked their own, but simply provided a notably exceptional service to another. The BSA website lists 6,229 Medals of Merit awarded since 1945. It uses the same medallion as the Heroism Award, but has a gold, blue, gold ribbon. Older versions of this Medal a blue enamel border instead of the red enamel on the current Medal. 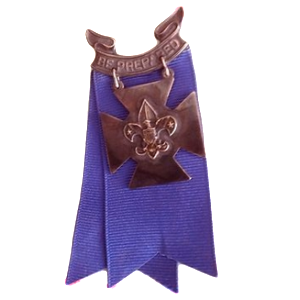 The current scheme for Lifesaving / Heroism awards was put in place in 1925 to replace the Lifesaving Award, which was the award system used from 1915 to 1925. There were three levels of lifesaving award: Lifesaving Gold Award, Lifesaving Silver Award, and Lifesaving Bronze Award. An image of a Lifesaving Silver Award is shown here as an example and each of the awards are similar in look and design. They consist of a Maltese Cross with a Tenderfoot Emblem hanging from a Be Prepared scroll. The cross reads “Honor” on top of the emblem and “Boy Scouts of America” below on some of the awards. These awards are usually found with a “Dieges & Clust, NY” Hallmark, although at least some of the earlier Bronze Awards have a TH Foley Hallmark, these date to before 1915. The main difference in the three awards is the color of the ribbon hanging behind the award. The Gold award has a white ribbon drape, the Silver Award has a blue / purple ribbon drape, and the Bronze Award has a red ribbon drape.

The Lifesaving Awards were presented with a large certificate that looks like a parchment, it is usually signed by Daniel C Beard, who was one of the first Scout Commissioners, he served 30 years in that position. The Boy Scout Lifesaving Award is extremely rare because it was a difficult award to earn and the period where it was an award was in the very early years of Scouting when it was a smaller program. The certificates are also very rare.

If you have any of these awards, please Contact Us for more information.